Previous Next
Why Mercedes? | Astro Awani 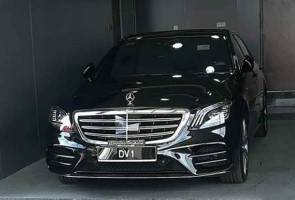 AS an “Islamic” political party that is leading the Kelantan state government, Pas is expected to be the humblest state government of this country with its publicly-known identity of being a stand-alone party that fights for Islam.

Picking Mercedes (hope my spelling isn’t incorrect because I don’t drive one) as an official car of the Chief Minister isn’t a good idea.

Or we can agree to pronounce it unacceptable.

When the majority of Kelantaneses are suffering the inadequacy of economic prosperity, their state leaders are being ‘elegant’ by using the well-branded Mercedes Benz S 450 L AMG that is too exorbitant to many moderate Malaysians who just earn a “enough to eat” salary.

We don’t actually care about what car does a state government use if the government excellently governs the state with the people are economically focused, concerned and aided.

When a hope is translated into a ballot by a vote, it means that voters seriously entrust the party represented by the candidate they chose unless the candidate contests under the key logo.

When Kelantan and Terengganu were the only states won by Pas in the last general election, the people from the states had clearly sent a message to the elected leaders that the state’s economy must be reinvigorated with many poor or needy could be sustainably helped and substantial development could be done for every constituency, especially rural one.

Even though the price of the Mercedes for the state leaders was said to have been discounted, but still, the state government has to be financially sensitive by managing what are the priorities and what are not for the state’s people who are in serious demand of the improvement of their wellbeing.

There are many other car brands that are financially affordable to be used by the state government if “convenience” is what they wish to have.

With the likes of Proton X70 and Perdana, which is presently ridden by the cabinet ministers, these two cars are good enough to make ‘work-hard’ politicians feel comfortable at the wheel.

The new Proton Persona is also OK — it’s now sophisticatedly equipped with its applauded ‘Hi Proton’ technology that can interact with its owner.

Functioned like the Google Assistant, the Chief Minister or any state leader can ask the robotic voice, “Where are the best places to have Nasi Kerabu?” or tells it to slow down the radio’s volume.

Everyone has a dream of driving a luxury car or even owning a private cruise, but a theoretical discipline of economy always teaches us to be choosing needs over desires.

Especially as a government, economy is what they need to smartly manage in making sure the state’s financial resources are correctly channeled to the right places without even a cent being carelessly used.

Your neighbours won’t badmouth about you driving a Hummer if your wife and kids are well-cared with the wife always goes out with new cloths and the kids never miss being named as their school’s best students.