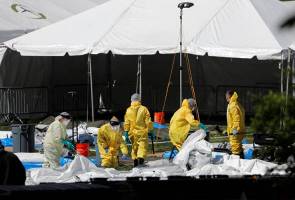 NEW YORK: The number of COVID-19 cases in the United States surpassed the two million mark Wednesday to reach 2,000,464 as of 11.33 pm local time, according to the Centre for Systems Science and Engineering (CSSE) at Johns Hopkins University, Xinhua news agency reported.

Meanwhile, the national death toll from the disease rose to 112,924, according to the CSSE.

Other states with over 100,000 cases include New Jersey, California, Illinois, and Massachusetts, the CSSE data showed.

According to The Washington Post, since the start of June, more than a dozen US states, including Texas and California, have recorded their highest-ever seven-day average of new COVID-19 cases, partly caused by the protests against police brutality that have swept the country in the past two weeks.