Previous Next
Syed Saddiq under probe over alleged seditious remarks 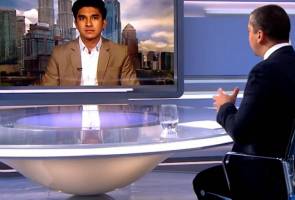 KUALA LUMPUR: Former Youth and Sports Minister, Syed Saddiq Syed Abdul Rahman has been called in by Bukit Aman today to give his statement over an alleged seditious remark made in an interview with an international television station last March.

Bukit Aman Criminal Investigation Department assistant director (Prosecution and Legal), DCP Mior Faridalathrash Wahid said the Muar assemblyman was expected to present himself at Bukit Aman at about 2.30 pm today to facilitate in the investigation.

“The case is being investigated under Section 4(1) of the Sedition Act and Section 233 of the Communications and Multimedia Act,” he told Bernama.

Meanwhile, Syed Saddiq in a tweet confirmed that he has been called up by Bukit Aman in regard to his statement during an interview with Al-Jazeera reporter Mehdi Hassan.

“The interview was for Al Jazeera and aired on March 6 (almost four months back). I am ready to give full cooperation to the police,” he tweeted. – BERNAMA