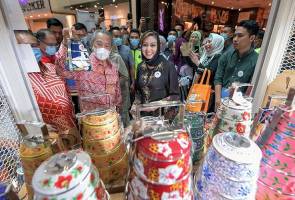 KUALA LUMPUR: In order to revive and maintain the competitiveness of the Malaysian economy post-COVID-19, Prime Minister Tan Sri Muhyiddin Yassin has urged the people to “spend for Malaysia”.

He said consumers should ensure that their spending is value for money, including by buying quality local products.

Muhyiddin said the COVID-19 pandemic has been a difficult and challenging moment for Malaysia and has forced almost all countries to impose lockdowns and close their economic sectors, in what has been billed as “The Great Lockdown”.

To curb the spread of COVID-19, Malaysia implemented the Movement Control Order (MCO) on March 18 to restrict movements and close the country’s borders, followed by the enforcement of the Conditional MCO on May 4 which saw the reopening of most economic sectors.

Since being placed under the Recovery MCO on June 10 as part of its exit strategy, Malaysia has been gradually easing restrictions to allow more economic and social sectors to operate.

Muhyiddin said surveys done by the Statistics Department on firms and businesses during the MCO showed that almost 65.5 per cent of them faced the challenge of lack of customers while 45 per cent of the companies would take more than six months to recover.

At the moment, he said, the country’s major economic sectors had returned to operating at their usual capacities while 90.1 per cent or 13.7 million Malaysians had gone back to work.

Therefore, it is hoped that the Buy Malaysian Products Campaign would mark the start of joint efforts by the government, industries and the people to ensure that the economy could be revived, he said.

Muhyiddin said the current campaign carried the same spirit as when the initiative was launched in 1984 to boost domestic spending by encouraging consumers to buy products made in Malaysia.

Muhyiddin said the campaign was also aimed at enhancing the capability of local companies, especially by strengthening their cash flow and competitiveness.

To ensure that the campaign would give a major impact on the local retail sector, he said, the government via PENJANA had allocated RM20 million for a campaign to prioritise the use of local goods and services.

“This will encourage the marking of locally made goods at supermarket chains and create a specific channel for Malaysian products on major e-commerce platforms,” he said.

However, the prime minister said the campaign should not be limited to the manufacturing sector but should also cover services in areas like tourism, health and logistics.

“Although the country’s borders are not allowed to be opened yet, we are fully confident that domestic tourism will contribute to the recovery phase of the national economy,” he said.

Muhyiddin said statistics showed that 239.1 million domestic visitors with total spending of RM103.2 billion were recorded in 2019, representing increases of 8.1 per cent and 11.5 per cent respectively over the figures for 2018.