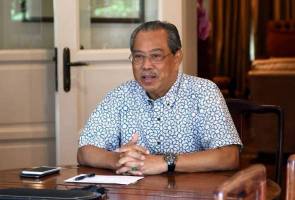 Instead, the PMO said in a statement, Muhyiddin had strictly adhered to the Standard Operating Procedure (SOP) set by the Ministry of Health (MOH).

“We wish to categorically state that the content in the report is completely baseless and the allegations are indeed malicious.

“During the quarantine period, the Prime Minister strictly adhered to the SOP and did not leave his house,” the statement said.

“All official duties were conducted from home including a video conference with YB Senior Minister of Defence and Director General of Health,” it added.

Therefore, the statement said, the allegation made by the Sarawak Report news portal that the Prime Minister had broken quarantine rules and flew overseas were baseless and merely a fiction created by the writer.

In fact, it said, the writer and the Sarawak Report news portal must be held accountable for the false allegations hurled at the Prime Minister, adding that the burden of proof is on the writer to back these frivolous claims regarding the private jet, hospital in Singapore and doctors as alleged.

“It is regrettable that the news portal has turned into a political tool to spread lies through baseless allegations.

“This is an unnecessary distraction at a time when the country is facing an unprecedented health pandemic and monumental economic challenges ahead,” the statement said.

The PMO further stated that the Prime Minister’s health was not as reported by the portal.