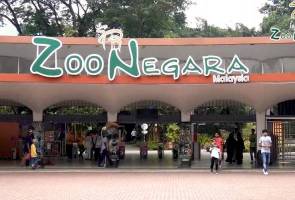 “Each visitor needs to comply with the SOP to break the COVID-19 transmission chain,” he told Bernama when contacted here today.

Recently, images of visitors not practising social distancing while watching a show at the zoo had gone viral.

Meanwhile, Zoo Negara deputy president, Rosly @ Rahmat Ahmad Lana said, there were many visitors during the first week of the zoo’s re-opening on June 10 and admitted that there were some who did not comply with the SOP.

According to him, between 300 and 700 people visited the zoo every day, with up to 1,500 visitors on weekends.

“We admit that things were a bit disorderly when the zoo first re-opened after being closed for a few months following the COVID-19 crisis, but we are now making sure that visitors comply with the SOP. The monitoring by the police and other enforcement personnel also helps our operation to run smoothly,” he said.

Rosly said that family members visiting the zoo as a group would be provided with numbers to facilitate the compliance of the SOP under the RMCO.

He explained that the zoo would resume normal operating hours this Saturday from 9 am to 5 pm.

A survey by Bernama today found the zoo to be filled with visitors, all of whom complied with the SOP.

Yesterday, Senior Minister (Security Cluster), Datuk Seri Ismail Sabri Yaakob was reported to have said that the easing of regulations allowing people to visit public attractions, such as Zoo Negara, could be rescinded if there were any violations of the rules and SOP. – BERNAMA