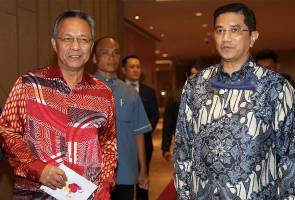 JOHOR BAHRU: The Transport Ministry has assured the remaining two issues related to the Rapid Transit System (RTS) project linking Johor Baru and Singapore are expected to be resolved next week before the whole negotiation process is completed by the end of this month.

According to him, the two countries had previously faced 222 issues related to the project, however, 220 of them have been successfully resolved while the remaining two issues would be resolved next week.

It is understood that another technical committee will convene on July 13 to resolve the two key issues, he told reporters after attending an industry roundtable discussion here today. Also present was Johor Menteri Besar Datuk Ir Hasni Mohammad.

Asked to elaborate on the two unresolved issues, Mohamed Azmin said he did not want to draw any conclusions because the matter was being discussed.

“These issues are still pending approval from both countries and when I contacted the Transport Ministry this morning, they gave the assurance that both parties will be able to resolve (the remaining issues) because we are given until the end of July to conclude the whole process of negotiation,” he said.

“This RTS is important to facilitate the people of Johor who have to cross over to Singapore for work purposes and we are working to resolve the congestion problem on the Johor Causeway,” he said.

Meanwhile, Hasni said the development was good news for the people of the state as the RTS would finally become a reality.

“It will be a catalyst for change in Johor creating supply chains that involve various sectors,” he said.

The four-kilometer RTS project linking Bukit Chagar, Johor Bahru to Woodlands in Singapore is a long-awaited project as it will allow about 10,000 passengers, especially Malaysians to cross over to Singapore to work in the republic.

Construction for the RTS project was supposed to have started last year, but has been delayed several times.