Previous Next
Reduce foreign workers between 30-40 per cent Academician 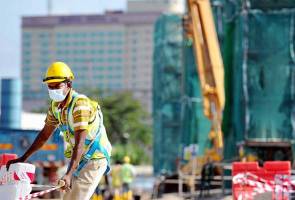 KUALA LUMPUR: The number of foreign workers in this country needs to be reduced between 30 to 40 per cent in a bid to lower the unemployment rate which is expected to jump 4.0 per cent this year due to COVID-19 pandemic.

“This is especially so in jobs such as cashiers, shopkeepers, security guards and if (jobs) in the dirty, dangerous and difficult (3D) sector but it takes some time because they need training and so on,” he said during Bernama TV’s “Ruang Bicara” programme last night.

He said job opportunities will be limited.

“Looking at the latest data also showed the probability of (people) losing jobs is about two to three million, while universities this year alone will release almost 400,000 to 500,000 graduates (into the jobs sector).

“This is a huge number and this is not just happening in Malaysia, other countries are facing the same problem especially in the United States which faces an unemployment rate of more than 20 per cent,” he said.

Therefore, Anuar said the focus should be on how the country could fill the job sector with Malaysians, especially those with low incomes.

“Official figures show there are 1.9 to 2.2 million foreign workers in Malaysia, but we know that there are many illegal immigrants and refugees.

“If we add all this, we have around five million foreign workers in this country,” he said, adding that the figure is twice the number of the Indian community in Malaysia, which is around 2.25 million in 2019.

He also suggests the government create a special scheme for graduates to enable them to further their studies at graduate and doctorate level so they could have a chance of securing a better job when the COVID-19 pandemic is over.