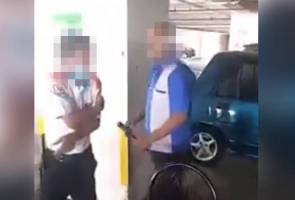 KUALA LUMPUR: Police have an opened investigation paper into a video showing a Nepalese security guard being beaten with a stick in a parking lot near here.

“It is believed that the incident involved the suspect, a Pakistani national, and a Nepalese working as a security guard at the building.

“An investigation paper under Section 324 of the Penal Code has been opened. The cause of the incident is being probed and we are seeking the parties involved to come forward immediately to assist in the investigation,” he said in a statement today.

Until now, the victim has yet to lodge a police report.

The 44-second video, which went viral today, showed a man slapping and beating another man, believed to be a foreigner in security guard’s uniform, with a stick.