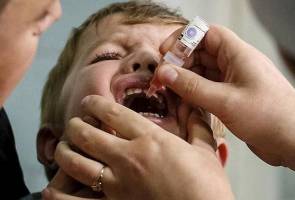 He said following the detection of poliovirus in the sewage sample collected from the locality, the Ministry of Health (MOH) through the Labuan health department conducted a polio immunisation campaign to prevent infection among the residents.

“This campaign involves the delivery of two doses of bivalent oral poliovirus (bOPV) types 1 and 3 vaccines to all children aged 13 and below in Labuan.

“Parents in Labuan also need to ensure that their 13-year-old children have received the polio vaccine and any questions pertaining to the campaign can be obtained from the Labuan health department’s polio operations room at 087-596 020 or 087-596 160”, he said in a statement today.

Dr Noor Hisham said that in the meantime the Sabah health department was still conducting polio immunisation campaigns statewide and the number of cases in the state thus far remained at four.

For children in other states, parents need to make sure their children are receiving the polio vaccine at the age of two, three, five, and 18 months.

“If the children who have missed the procedure, parents are advised to go the health clinic for the rescheduling of immunisation according to the child’s age”, he said.

He said polio vaccination injections using the DTaP-IPV-Hib vaccine to prevent infections such as diphtheria, pertussis, tetanus, polio and Haemophilus influenza type B, should be given (to infants) at the age of two, three, five and 18 months.

“This is to ensure that every child is optimally protected from polio, while oral polio vaccine is an additional vaccine in order to ensure the spread of the poliovirus can be stopped”, he said.