National Day celebration to have elements of Rukun Negara – Saifuddin 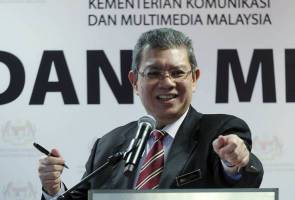 PUTRAJAYA: In conjunction with the 50th anniversary of Rukun Negara this year, the elements of Rukun Negara will be incorporated in the events and activities of the National Day 2020 celebration, said Communications and Multimedia Minister Datuk Saifuddin Abdullah.

He said even though the form of the celebration post-COVID-19 has yet to be finalised, the elements of Rukun Negara would be injected through the efforts of agencies under the ministry, particularly the Malaysian National News Agency (Bernama) and RTM.

“To put it briefly, we will be having the first day cover for Rukun Negara, webinars, e-book and field programmes involving the Information Department,” he said in a press conference after tabling his 100 Days Report Card here yesterday.

Saifuddin said inculcating the Rukun Negara elements within every Malaysian in formal and informal ways using various approaches and medium would be one of the key initiatives of the ministry’s action plan in the next six months.

For the long term, he said, the ministry proposed that the Rukun Negara education programme be implemented in schools, universities and other organisations.

Saifuddin said although the Rukun Negara has been part of several subjects in school such as History and Pengajian Am (General Studies), it could be improved so that students could fully embrace it.

“Some schools even have their own Rukun Negara club and others have conducted programmes relating to Rukun Negara. So, we will be looking into this in detail,” he added.

However, he said, the long-term programme would be placed under the jurisdiction of the National Unity Ministry.

“I have discussed this matter with the minister (Datuk Halimah Mohamed Sadique) and she already has some plans in mind,” he said.