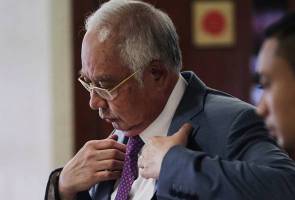 “Parties were supposed to file their respective submissions to court yesterday, however, the prosecution requested for an additional two days to reply as the defence’s written submissions were voluminous.

“High Court Judge Mohd Nazlan Mohd Ghazali has granted our request for the two-day extension. However, we have since filed our submissions earlier today,” he told Bernama when contacted today.

On May 5, the defence had submitted a total of 643 pages of written submissions while the prosecution, 306 to the High Court and both parties have to reply to the submissions.

The oral submissions have been fixed for three days from June 1 to 3.

On March 11, the defence closed its case after calling 19 witnesses during the defence trial that ran for 33 days since Dec 3 last year.

The prosecution had earlier called 57 witnesses to the stand.

On Nov 11 last year, Najib was ordered to enter his defence on seven charges of misappropriating RM42 million in SRC International Sdn Bhd funds, comprising three counts of criminal breach of trust (CBT), three counts of money laundering and one count of abuse of position in relation to the SRC funds.