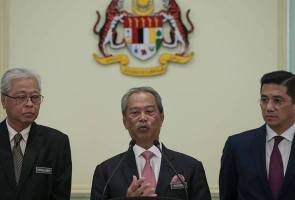 “It is his (Tiong) choice. the Yang di-Pertuan Agong has consented to the appointment. But if he thinks it is not suitable for whatever reason, we will accept that.

“Of course I will have to find a replacement whose appointment will be approved by the King,” he said in a news conference after chairing the first Cabinet meeting here.

Yesterday the media reported that Tiong was absent from the swearing-in ceremony of ministers and deputy ministers at Istana Melawati here.

PDP secretary-general Datuk Nelson Balang Rining said the party’s supreme council had agreed that Tiong should reject the post, as it was not befitting of his status as a party chief and a five-term Member of Parliament.

Muhyiddin however said that he would meet Tiong tomorrow.

“He (Tiong) still wants to serve the country in a different capacity, so I will meet him tomorrow to discuss this,” he added.