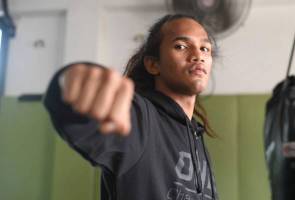 AFTER pulling off a remarkable victory at ONE: DAWN OF HEROES in August, ‘Jungle Cat’ Muhammad Aiman has his sights set on another impressive outing in ONE Championship.

On Friday, 6 December, the 24-year-old Negeri Sembilan native faces his next obstacle, China’s Chen “The Ghost” Rui at ONE: MARK OF GREATNESS.

The Chinese martial artist has been riding an impressive seven-bout win streak before his recent defeat, and Aiman possesses all the tools to keep his opponent in the losing bracket.

Here are three of those crucial tools.

The Malaysian hero’s standup game has come a long way since his promotional debut back in 2016.

With the “sweet science” of boxing being his forte and foundation, Aiman has gone on to demonstrate excellent ring control and striking throughout his matches in ONE.

An expert in using feints as part of his strategy, Jungle Cat was able to trap both Rin Saroth and Yang Fei in their previous encounters.

He also places importance on striking versatility, which makes him an even more unpredictable athlete.

Speed is arguably one of his biggest assets.

Making use of explosive movement and footwork, martial artists who face Aiman have always had a hard time entering the pocket with him.

Alongside sharp anti-wrestling tactics, he diffuses opponents with his punch combinations, thus reverting any attempts of turning the contest into a grappling match.

Evident in his previous match against “The Terminator” Sunoto, the Bali MMA athlete was successful in constantly finding a place for his quick one-two’s, and at the same time, pulling off well-timed reversals.

Aiman’s skillset seemed to have taken a massive revamp after suffering a loss at the hands of Danny ‘The King’ Kingad.

He has been working tirelessly to improve his wrestling under the eyes of the Leone Brothers and Don Carlo-Clauss.

The former MIMMA Champion’s efforts have not gone unnoticed, having defended takedowns superbly against athletes like “The Terminator” Sunoto.

His knowledge in the art of wrestling may be the pivotal factor in his upcoming match against Chen, who is a skilled grappler.

Don’t blink an eye when these two bantamweights meet in Kuala Lumpur’s Axiata Arena next Friday, 6 December at ONE: MARK OF GREATNESS.