Maszlee is a missing pearl that we just realised its preciousness 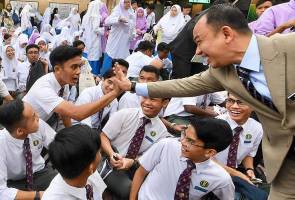 I have never met the just-resigned Education Minister, Dr Maszlee Malik, but from afar, I know that he is a benign man with unsettled missions to pursue.

I’ve always seen him in Parliament, but I’ve never had a second to say “Hi YB” to him.

He is a small but calm guy with natural smiles that are always painted on his lips.

And from the distance I stand, I could feel that he is nothing but a pearl with unappreciated preciousness.

Like some say, politics isn’t a good place for goodhearted men like Dr Maszlee. I agree with that.

People with a big heart and sincerity to serve the people would be the first to be killed off by those sinful characters who detest whatever “clean things” done by the kind men.

Dr Maszlee is actually a good role model to every arrogant minister who is deaf to the people’s anger and dissatisfactions.

They think that they are so powerful and immortal that people’s voices are just a common noise.

In his media statement that clarified his resignation, he reminded that “a reformation can’t never be successful if the people’s welfares are not prioritised.”

I could sense that the paragraph-four statement has an intended message to tell to every elected politician, especially ministers, whom Dr Maszlee has felt unhappy about.

He wasn’t just a minister to the people, but he had always been a motivational educator to schoolkids he met.

He taught them that “differences don’t matter, but unity does.”

I saw a video of him welcoming pupils recently on his Twitter, and what touched my heart the most was when he kissed a male pupil’s hand.

In that video, he truly looks like a father to every pupil he greets.

Despite his resignation, he will always be a great teacher to all Malaysian students, and I do believe that the only better place for him to serve and contribute is in the education field that is free from dirty political stuff.

Thank you for your presence and goodness, Maszlee Malik.