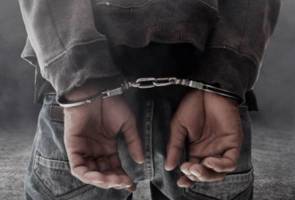 JOHOR BAHRU: A man believed to be involved in a robbery and has 18 previous criminal records was arrested in Taman Universiti area near Iskandar Puteri today.

Iskandar Puteri Police chief ACP Dzulkhairi Mukhtar said the 31-year-old was picked up by a police team which was conducting Ops Lejang Khas at 2.45 am.

He said the suspect was arrested following a robbery case involving a 50-year-old woman on June 18 near the corner of SpeedMart99 in Jalan Pulai, Taman Pulai Flora, Kangkar Pulai./p

“The suspect sneaked from the back of the victim and snatched her necklace. The man then fled the scene in a vehicle parked near a supermarket.

“The victim who suffered minor injuries to the elbows and knees then lodged a police report,” he said in a statement here.

He said inspections revealed that the keys as well as the Proton Inspira were related to four reported missing vehicles in Taman Perling.

“Investigations will continue to identify other possible suspects, as well as the suspect’s possible involvement in other cases in Wilayah Iskandar,” he said, adding that the suspect was also tested positive for methamphetamine.

He said the robbery case was being investigated under Section 382 of the Penal Code and a remand order would be requested today.