Previous Next
Malaysian togetherness in football is world class 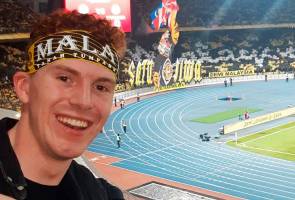 MY experience at the last night at the Malaysia vs Indonesia game changed my life, it unearthed a hole in my heart that I didn’t know was missing until I went to the Bukit Jalil and that is togetherness.

People will question what does that mean, what is this Australian talking about when Australia is famous for it’s comradery and mateship born out from the days of the Anzacs arm and arm in Gallipoli.

But do Australians really understand their identity and togetherness with Sport? As your average Australian has a perception that sport depicts who you’re, whether you’re Australian, if you play Australian Rules, Cricket or Rugby. This limiting belief is ubitquous that the world game in Australia just reflects an ethnic demographic is a challenge that Australia shouldn’t let the environment control how Australia want’s to be a nation with a opportunity to change the destiny of it’s future. I have a deep cultural football awareness that it shouldn’t matter whether you have Italian, Scottish, Jordanian or any other lineage that this should deem that you’re not Australian. This should be embraced with acceptance and used as a unifying tool to believe that I am you’re, we are Australian in following in the footsteps of Malaysia.

Malaysia is a world leader in this field of acceptance of connecting cultures with a multi religious and multi-cultural differences having trilateral groups of Malay, Chinese and Indian, uncovered to me that Malaysian Football is a hidden gem in world sport with sending a strong message on harmony as a powerful way to educate by bringing people together through simply the love of the beautiful game. Nullifying racism by empowering Malaysian people with respect to all religions enhances the pride of Malaysians National Team the Harimau Malaya (The Malaysian Tiger) is contagious.

I as a New Colombo Plan scholar in Asia wish all Australians had a moment in their life to experience this emotional and unconditional love Malaysians have for each other in the Bukit Jalil. Malaysians understand something that Australian don’t want to believe that the game impacts your international standing and pride as Harimau Malaya may not have the resources to compete with the heavy weight of China, Saudi Arabia, Japan and Australia. Something that stuck in my mind speaking to legendary football manager Claudio Ranieri at Craven Cottage in January famous for his heroics at Leicester City & Cagliari – the one poignant thing he said to me that passion was the most important thing. This is something that Malaysian so undeniably possesses and is a vehicle with the development of the youth football in conjunction with youth players having the opportunity to gain minutes in the Malaysian super league can only supplement the Harimau Malaya taking Malaysia one day to the heights higher than the hill of the Bukit Jalil.

In front of a 80,000 seat crowd the Bukit Jalil is a amphitheatre of world sport that exudes an unparallel, unscripted raw beauty of stadia with drama at every turn as well complemented by fanaticism unrivalled in Asia and is comparable with any major derby in Europe and demonstrates that this is pinnacle of Asia for fan support. I have been so blessed to witness football in many of the iconic amphitheatres around the world. Although nothing compared to the enthusiasm and intensity of Malaysian Football on exhibition last night. The Ultras Malaya active support was unreal the hours of dedication to design the famous TIFO exhibited during the national anthem displaying the words “one soul’ depicting that love Malaysians have for the Harimau Malaya is always present and living in the soul of all Malaysians.

This is not present at a national level in Australia but at a club level with Melbourne Victory and Sydney FC. However, the experience for Malaysia to play their neighbours in a derby that emanates a social and political derby with Indonesia.. The Italian saying is that football is more than emotion forever couldn’t be more evident in the spirit that Malaysia imparted with everyone that attended last night’s game. I knew I left with an indelible mark in my heart of Malaysian football and the people.

The constant chanting, choreography and the Malaysian tidal wave of yellow support, has given me the insatiable appetite and self-fulling prophecy that Australia will one day achieve this level of support – that fans have the willingness to travel from everywhere as Malaysians do from Penang, Sarawak, Kedah all to the holy grail of the Bukit Jalil with the one goal of supporting their nation for ninety minutes. Australia can take a leaf out of Malaysia’s book that everyone was together, despite your race, colour, religion, background Malaysian Football is a driving force to unite.

Malaysians are so fanatical, obsessed and consumed by the game with thousands at the stadium four hours before the game is unheard of in Australia. The feeling of the unexpected anticipation of a important World Cup Qualifier on the road to Qatar 2022. Malaysian were sitting in the park discussing intently the potential tactics of revolutionary coach Tan Cheng Hoe. Until an hour before the game where there was no room to move, people were boisterously marching into the stadium singing for their country, wearing their hearts on their sleeves this is the level and mountain Australia has to climb to be akin to Malaysia in support.

However, Malaysian’s shopping in the market stalls, this is one-way Malaysia has found the perfect conduit of interconnecting people by keeping the game local in terms of commercialization. The current consensus in Australian sport is that it has become so commercialized and privatized that is has lost its connection to the people who live for the game by investing their own finances, support and time into the game.

My favourite moment it was a seminal one when Safawi Rasid scored the second goal that was when I felt that I was in a true spiritual home of football in the Bukit Jalil it illustrated there was no better way to immerse yourself by experiencing a culture of a country than through football with the locals bestowing whatever your temple, cathedral or mosque the rich tapestry, diversity of Malaysian football is omni-present for the world to see.

**** The views and opinions expressed in this article are those of the author(s) and do not necessarily reflect the position of Astro AWANI.