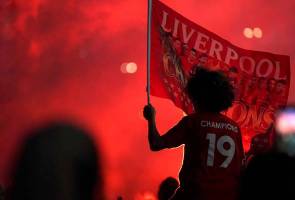 Sports podcast host and Liverpool FC fan, Nikhil Reuben Michael pointed out how social media highlights the club’s huge fan base in Malaysia as these local Kopites rejoice in their favourite team’s victory.

Even the Prime Minister, Tan Sri Muhyiddin Yassin joined in the celebrations and congratulated the English football club along with its diehard supporters on his social media account.

Among the many fans in Malaysia are a couple of cabinet members well-known for their love of Liverpool FC, and they were also clearly over the moon with their team’s success.

As a fan, Nikhil was also overjoyed as he managed to witness the golden moment.

“There’s a huge community of Liverpool fans here. With the COVID-19 pandemic, the only way fans can celebrate is through social media and I think this is one of the best things about social media as it brought the fan base together,” he said while speaking to Bernama today.

Nikhil described the title win as a big relief for Liverpool fans after a three-decade hiatus and also a win that has given them an “insane amount of pride”.

“The fans all feel that it’s been a long 30-year wait and the clinching the title is a huge turning point,” he added.

Meanwhile, Liverpool was the top-trending hashtag on Twitter trend with its global fanbase posting and sharing stories of the title win.

User @a href=”https://twitter.com/eddymanan88″eddymanan88/a tweeted “Tahniah Liverpool. Welcome to the club,” along with the picture of previous EPL title-winning teams while on Facebook, user Renie Ubara postedb “/bRemarkable WIN! A Champion, Always A Champion! For this season we WA = “Walk Alone” to the TOP”.

Some Facebook users even changed their profile and cover images to ones of the new English champions.

Liverpool won the title after their nearest challengers, Manchester City were defeated by Chelsea 2-1 in a match late Thursday.