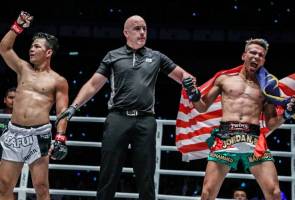 KUALA LUMPUR: There were no shortcuts in Mohammed ‘Jordan Boy’ Mahmoud’s training camp ahead of his Muay Thai clash against Saiful ‘The Vampire’ Merican.

Before his bout with “The Vampire,” the 23-year-old martial artist knew that his stamina was the sole thing missing from his skill set. Fearing it could cost him another win, the athlete took it upon himself to search for a new gym to work on his conditioning.

It did pay off for the Kedah native, as he registered a unanimous decision win over his compatriot at ONE: Masters Of Destiny on Friday, 12 July.

“For this match, I prepared at two gyms,” Mohammed pointed out. “One was at my regular gym in Sampuri Muay Thai Gym Ampang, while the other was at Selendang Kuning Muay Thai Studio in Bukit Jalil.”

“I knew my stamina was lacking, and I needed another way to go about it. My coach agreed, and he worked on a lot of strength and conditioning techniques, which helped in my fight. It was something new to me, and not the usual jogging or running.”

Back in December, the “art of eight limbs” practitioner stunned his Malaysian supporters in his debut when he dropped Stergos “Greek Dynamite” Mikkios to the canvas in the opening round.

It was a different tale a month later, though, as “Jordan Boy” suffered a TKO defeat at the hands of Hiroaki Suzuki. Two more losses followed, but it was clear that with a better gas tank, Mohammed was going to be a dangerous opponent.

“Round three was where I believe it showed my true advantage [my stamina] over Saiful Merican,” he explained. “I had a lot left in my tank, and even if it went on for another round, I’m confident I would have come out of my corner with the same energy.”

With his 32nd career win under his belt and some new-found stamina, Mohammed’s confidence is starting to grow.

Will this win be the start of many more to come for the talented Mohammed at The Home of Martial Arts?