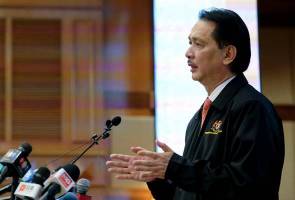 PUTRAJAYA: The Health Ministry today issued a veiled warning on the possibility of a spike in the number of COVID-19 positive cases despite the country recording today the lowest number of new cases since March 18.

Complacency among the people and their non-compliance with the standard operating procedures (SOPs) of the ongoing Conditional Movement Control Order (CMCO) can cause a new wave of the disease in the country, said Health director-general Datuk Dr Noor Hisham Abdullah.

He advised the people to remain alert and not take it easy with just 15 COVID-19 positive cases reported today, the lowest since the MCO was imposed on March 18, saying that the war against the disease is not over yet.

“The Ministry of Health (MOH) is worried that there may be a spike in the number of COVID-19 cases following the movement of people by way of visits, inter-state travel and mixing with other members of the community during the Aidilfitri celebration,” he said at his daily COVID-19 status update for the media, here.

Dr Noor Hisham said that if the people continue to comply with the stipulated SOPs, the number of COVID-19 positive cases can drop further.

“If we adhere to the SOPs, we will manage to bring down the cases further. Today, we had 15 cases, six of which are imported. This means today is the first time that we have got a single digit (case) – nine cases of local transmission. MOH managed to bring down the number of cases to not only double digit but single digit,” he said.

He also said that based on the report of the World Health Organisation (WHO), a total of 5,559,130 cases of COVID-19 were recorded around the world up to yesterday.

“Of the total, 348,610 cases of deaths have been reported so far. The pandemic is seen as getting more serious and is far from over. To date, cases in Malaysia have contributed to 0.14 per cent of the total number of COVID-19 positive cases in the world,” he said.

Dr Noor Hisham also thanked the Royal Malaysia Police for having done a good job so far in preventing people from attempting to breach the CMCO prohibition on inter-state travel with no valid reason.

Senior Minister (Security Cluster) Datuk Seri Ismail Sabri Yaakob had disclosed at a media briefing earlier today that the police stopped and checked 2,449,556 vehicles between May 16 and noon today.

Also during the same period, the police turned back 18,303 vehicles whose occupants attempted to breach the inter-state travel ban to return to their villages.