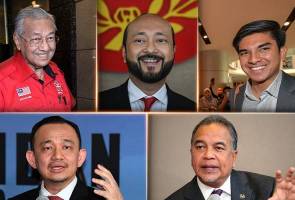 KUALA LUMPUR: Tun Dr Mahathir Mohamad today stated that he and five other MPs along with the Parti Warisan Sabah (Warisan) will remain as an independent bloc inside and outside Parliament.

According to him, they will not join any coalition, whether it is the Perikatan Nasional led by Prime Minister Tan Sri Muhyiddin Yassin, or Pakatan Harapan led by Opposition Leader Datuk Seri Anwar Ibrahim.

“We have decided to stay with Warisan as an independent bloc inside and outside Parliament. We will not join any coalition.

“We also oppose any attempt to replace the Speaker and will continue with a no-confidence motion on Tan Sri Muhyiddin Yassin who formed a government not elected by the people,” they said in the statement.

Dr Mahathir said they still held on to the original struggle of rejecting the return of the kleptocratic government.