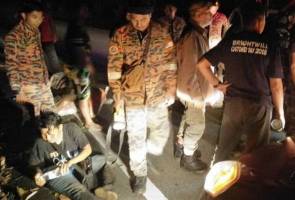 LARUT: Four people who lost their way while looking for orchids were found safe by a search and rescue team about five kilometres from the Redang Panjang Forest Reserve operation centre in Batu Kurau at 12.35 am, today.

A spokesman from the Perak Fire and Rescue Department said the victims, comprised a married couple, aged 71 and 42, with two other women, aged 60 and 47 respectively, were found safe and unhurt.

“All the victims were taken out of the forest safely,” he said in a statement here today.

He said the search and rescue operation ended at 2.45 am this morning.

Yesterday afternoon, the four individuals were reported to have gone into an oil palm plantation looking for orchids at Batu 23, Redang Panjang before one of them contacted the fire department at 7.14 pm stating that they had lost their way.