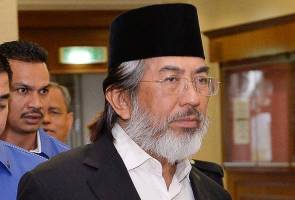 KUALA LUMPUR: An affidavit filed by former Attorney-General Tan Sri Abdul Gani Patail was one of the factors for the decision of the Attorney General’s Chambers (AGC) to withdraw the corruption and money laundering charges against former Sabah Chief Minister Tan Sri Musa Aman.

Attorney-General Tan Sri Idrus Harun said that on May 13, 2020, Musa sent a representation to the AGC seeking the case against him to be withdrawn and all charges to be quashed.

He said that on June 5, 2020, the Chambers received the affidavit which was filed in the High Court by Musa and which was affirmed by Abdul Gani to support Musa’s application to quash all the charges against him.

“The former Attorney-General defended the decision taken in 2012 to take no further action against Tan Sri Musa Aman as investigation revealed the monies involved were political funding.

“After studying and perusing the investigation paper from a legal stand point, the former Attorney-General in exercise of his discretion decided not to proceed with prosecution,” he said in a statement today.

Idrus further said in light of the representation and the recent development in the form of the affidavit by Abdul Gani, it was the responsibility of the department to review the whole evidence for this case.

He said having studied the whole available evidence and upon discussion with the prosecution and investigation team, he decided to withdraw all the charges against Musa.

“The Department of Justice Hong Kong advised that companies and banks in Hong Kong are only required to keep records for seven years and it is highly unlikely that neither the banks nor the companies would still have the records.

“Apart from that, there are witnesses for the prosecution who have passed away, suffered serious medical ailments or are not in Malaysia anymore,” he said.

The AG said this recent development including the affidavit that was filed has caused a situation wherein it was no longer tenable to continue with the prosecution of Musa.

He said the decision was strengthened by a letter dated Dec 22, 2011 from the Independent Commission Against Corruption (ICAC) Hong Kong stating that their investigation against Musa is complete and on the basis of known facts no further investigative action will be pursued.

“My decision is taken in accordance with powers exercisable at discretion under Article 145(3) of the Federal Constitution,” he said.

The High Court here today freed Musa, 69, from 30 corruption and 16 money laundering charges in connection with timber concession contracts in Sabah after the prosecution withdrew all the charges against him and granted the defence’s application for the accused to be fully acquitted.