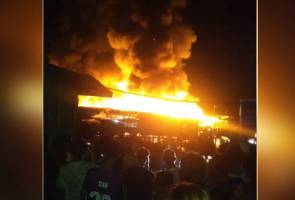 SEMPORNA: About 30 houses were destroyed in a massive fire in Kampung Sri Aman here early this morning.

Semporna Fire and Rescue station chief Fazizul Hizam Borhan said three engines with 17 firefighters were rushed to the scene after receiving an emergency call at 1.33 am.

“We were trying to extinguish the fire using seawater, fire hydrants and water tanks, and managed to bring the fire under control from spreading to nearby 190 homes,” he said.

Fazizul Hizam said the team also received help from Tawau and Kunak Fire stations apart from other agencies such as Sabah Electricity Sdn Bhd and police.

He said the fire was completely put out at 5.01 am and no fatalities were reported while the cause of the fire and estimated losses were still being investigated.