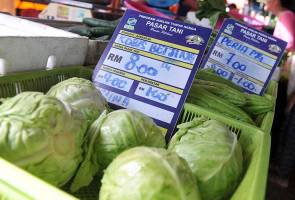 Deputy Minister of Agriculture and Food Industry I, Datuk Seri Ahmad Hamzah said since the implementation of MCO, the online marketplace has been registering an increase in sales particularly for fresh produce.

As at yesterday, it recorded cumulative sales amounting to RM1.18 million of which RM693,000 contributed by fresh produce segment while the remaining came from agriculture-based products segment, he told Bernama after visiting the Bandar Baru Selayang FAMA headquarters here today.

He also called on farmers to leverage Agrobazaar Kedai Rakyat (AKR) and Agrobazaar Rakyat (ABR) to market their products during Ramadan.

“To date, there are 321 AKRs and 115 ABRs operating during MCO nationwide, providing fresh produce and perishable goods to consumers,” he said.

On top of that, he said there are 50 FAMA outlets nationwide comprising 20 FAMA operation centres, 22 permanent farmers’ markets, MyFarm Outlet (3) and selected locations (5).

“We also have the Farmers’ Organisation Authority (LPP) and the Fisheries Development Authority of Malaysia (LKIM) which provide 31 and 63 markets respectively,” he said.

On the 50 controlled fresh markets (PST), he said since its operations on April 1 until yesterday, the marketplace had recorded cumulative sales of RM35.2 million.

“The initiative involves 530 entrepreneurs and it has received some 440,000 visitors as well as conducted 51,800 deliveries across the nation,” he added. -BERNAMA