ECRL expected to be operational by 2027 – Deputy Minister

Previous Next
ECRL expected to be operational by 2027 – Deputy Minister 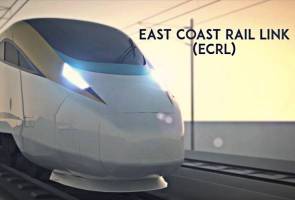 KUALA LUMPUR: The 640-kilometre East Coast Rail Link (ECRL) is expected to be operational as early as Jan 1, 2027.

Finance Deputy Minister 1, Datuk Abdul Rahim Bakri said the ECRL, which will potentially connect the peninsula’s east coast states of Kelantan, Terengganu and Pahang with Negeri Sembilan, the Federal Territory of Putrajaya and the Klang Valley, is scheduled to be completed by the end of 2026.

He said the project would be a catalyst for economic growth in the East Coast and the country as a whole in the next few decades.

“This project is also expected to boost trade between Malaysia and China. Being a China-funded project, we hope the country’s commodity exports, in particular oil, gas, palm oil, rubber and manufactured products, can penetrate the Chinese market more widely.

“When the COVID-19 pandemic ends, there will be an influx of Chinese tourists for sure, and the country’s tourism revenue will also increase,” he said in a statement after attending a briefing on the mega infrastructure project.

Unlike the existing three metre gauge double track, the ECRL will use the standard gauge track to enable rolling stock carriages with a speed of 160 km per hour to be installed.

“The standard gauge can use high-speed trains of over 300 km per hour, depending on the service operator’s requirement,” Abdul Rahim said.

The ECRL 2.0 track, so named after the downscaling of the project cost, has been shortened by 48 km to 640 km from the proposed 688 km, with the number of train stations also reduced to 20 from 26.

The project cost was trimmed by RM21.5 billion to RM44 billion from RM65.5 billion.