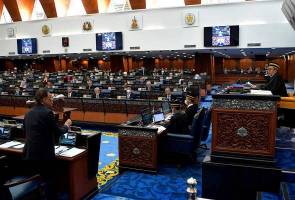 KUALA LUMPUR: The Dewan Rakyat today approved a motion brought by the government for Tan Sri Mohamad Ariff Md Yusof to vacate the seat of Speaker.

The motion was passed following bloc voting which saw 111 MPs voting for and 109 against.

Deputy Speaker, Datuk Mohd Rashid Hasnon, who was in the chair, announced the outcome of voting and said one MP did not attend the sitting.

Prime Minister, Tan Sri Muhyiddin Yassin had tabled the motion, saying there is a nomination to fill the seat of Speaker.

He is scheduled to table a motion proposing for former Election Commission chairman, Datuk Azhar Azizan @ Harun to be elected as the new Speaker in accordance with Standing Orders 4(1).

Earlier, Minister in the Prime Minister’s Department (Parliament and Law), Datuk Takiyuddin Hassan, in winding up the debate, clarified that it was the usual practice to change people in key positions, in this case the Speaker of the Dewan Rakyat, when a new government takes charge.

He said the Prime Minister had submitted a notice to nominate a candidate for Speaker of the Dewan Rakyat on June 29 and the motion had been accepted.

“We (the government) think the Speaker (Mohamad Ariff) needs to be replaced on the grounds that he may not be able to fulfil the aspirations of the current government,” he said.

Responding to a question raised by the opposition that the post should be vacant before a new Speaker can be appointed, Takiyuddin said Article 57 (2) (c) of the Federal Constitution stipulated that the Speaker of the Dewan Rakyat shall vacate his post if at any time that the House makes such a resolution.

Meanwhile, Langkawi MP Tun Dr Mahathir Mohamad, when debating the motion, said he was of the opinion that a neutral individual who was impartial to any side should be elected as the new Speaker to ensure that any decision made is done without government influence.

“It is not the Speaker’s duty to heed what the government says … why be afraid, you (government) have majority in this House,” he said.

Arau MP Datuk Seri Dr Shahidan Kassim stressed that the election of the new Speaker was in accordance with the standing orders, which required a 14-day notice. – BERNAMA