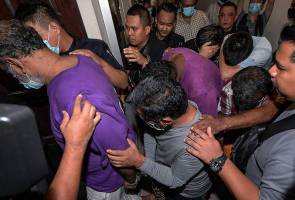 PETALING JAYA: Six men including a politician were charged in the Magistrate’s Court here today over the abduction of businessman Datuk Seri R. Arumugam whose body was found at Batu 27, Jalan Rawang Bestari Jaya on June 27.

Five of them – Azhari Shahrom Shaihmi, 56; Mohd Durai Abdullah, 52; Sheikh Ismail Sheikh Hassan, 26; N. Vickneswarar, 28, and a Bangladeshi, Kasi Nasrul, 42, – were jointly charged with abducting Arumugam, 55, who is also a real estate developer, with intent of holding the victim to a ransom of S$50 million (RM153 million).

They were alleged to have committed the offence in Taman Kejiranan Central Spine, Jalan Margosa, Bandar Sri Damansara, here, at 10.30 am, June 10, and charged under Section 3 of the Kidnapping Act 1961, read together with Section 34 of the Penal Code, which provides a death sentence or life imprisonment and liable to whipping, if found guilty.

The sixth accused, a former Parti Keadilan Rakyat (PKR) candidate for the Batang Kali state constituency seat in the 13th General Election (GE13), Datuk K. Ramachandran was charged with abetting the five in committing the crime, at the same time and place.

He was charged under Section 109 of the Penal Code, read together with Section 3 of the Kidnapping Act 1961, which which provides a death sentence or life imprisonment and liable to whipping, if found guilty.

They all nodded their head after the charges were read to them by an interpreter before Magistrate Mohamad Ikhwan Mohd Nasir.

However, there is no plea recorded as the case falls under the jurisdiction of the High Court.

Deputy Public Prosecutor Amir Abd Hamid did not offer any bail as the offences were non-bailable.

In the proceedings, only Ramachandran was represented by lawyer R. Sivaraj while lawyer Datuk Geethan Ram Vincent held a watching brief for the victim’s family.

The court fixed Aug 27 for mention and to obtain the DNA reports.

Earlier, Bernama reported that the victim was believed to have been abducted while working out at a playground in Bandar Sri Damansara on June 10 and his body was found in a bush on June 27.