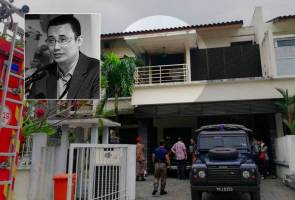 SHAH ALAM: A witness told the High Court here that the late Cradle Fund chief executive officer Nazrin Hassan had suspected his ex-wife was involved in a burglary at his house in 2015.

Nazrin’s former personal driver, Ahmad Edree Abdul Rashid, 43, said this was based on the lipstick stains found on the bed and no signs of windows or doors being broken.

“I saw some lipstick stains when I entered the master bedroom of the house, the same time the house was broken into,” said the 25th prosecution witness in Nazrin’s murder trial.

Earlier, Muhammad Shafee asked whether Ahmad Edree agreed that Nazrin had suspected Iza (Nazrin’s ex-wife) to be involved in the burglary based on a WhatsApp message the latter sent to a friend named Jaya.

Muhammad Shafee: In his (Nazrin) message, he had asked his friend if he knew any SB (personnel from the Royal Malaysia Police Special Branch Unit) as he wanted to investigate the case (burglary) in which he suspected his ex-wife was involved. Do you agree that the late Nazrin had suspected his ex-wife involved in the incident?

Muhammad Shafee: Do you agree that the lipstick stains found on the bed were not Samirah’s as it was not her choice of colour?

The witness also admitted that he was aware of the loss of Nazrin’s belonging such as cash, jewellery as well as his international passport in the burglary after being informed by the victim himself.

Ahmad Edree also told the court that there were strange happenings going in his former employer’s house and Samirah (Muzaffar) had found agarwood and salt in the car under the driver’s seat.

“I had seen the automatic gate of the house (Nazrin’s house) open and close on its own. I was also informed (by Nazrin) that Samirah had found agarwood and salt under the driver’s seat./p

“But I do not agree that Iza did it (putting the agarwood and salt in the car) because she did not have the opportunity to do so,” he said.

Samirah, 45, a former senior executive at the Intellectual Property Corporation of Malaysia, and two teenagers, aged 17 and 14, have been charged along with Indonesian citizen Eka Wahyu Lestari, who is still at large, with Nazrin’s murder.