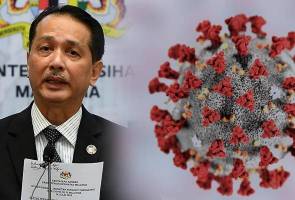 He said the index cases for the four clusters comprised two Malaysians and two non-citizens.

The Pitakwa PUI cluster index case is a Malaysian (case 8,737) who returned from Nigeria on July 11 but tested negative for COVID-19 on arrival at the Kuala Lumpur International Airport (KLIA).

“Following that, 44 close contacts were identified and screened, especially family members, passengers and crews of the aircraft, taxi driver and colleagues. Of this number, two were found positive (cases 8,754 and 8,755), three were negative and the rest are awaiting their test results,” he said in a statement today.

Dr Noor Hisham said for the Kuching Medical Centre Cluster, the index case is a Malaysian (case 8,734), an asymptomatic healthcare frontliner who was tested for COVID-19 as a high-risk person.

The individual was admitted to the Sarawak General Hospital after being found positive on July 14, he said. Subsequently, another positive case was detected from screenings done on 26 close contacts who included family members and colleagues.

On the Shirala PUI Cluster, which involved non-citizens, Dr Noor Hisham said the individual concerned is a professional (case 8,730) who arrived in Malaysia on July 6 for work purposes.

The COVID-19 tests done in India and KLIA were negative but five days later a repeat test, which was conducted after the individual showed symptoms, turned out positive, he said.

“That person has been admitted to Hospital Sungai Buloh. So far, two close contacts have been identified — one was positive (case 8,738) and the other, negative,” he said.

For the Jupiter Cluster, the index case (case 8,723) is a non-citizen, a sailor with a history of travel to Japan and Singapore.

Dr Noor Hisham said that the patient started showing symptoms on July 3 and his condition worsened on July 11 while the ship was in Sarawak waters.

“That individual was admitted to a medical centre and tested positive for COVID-19 before being transferred to Hospital Bintulu, Sarawak. Following that, 29 close contacts were identified from among the crew members.

“Of this number, two were found positive (cases 8,747 and 8,748) and 27 were negative. This cluster is an isolated import cluster. The community in the surrounding areas was not exposed to the crew members but any cases which require treatment will be immediately taken to a medical centre or hospital,” he added.