Previous Next
COVID-19 cases in Philippines rise to 25,930 with 539 new reported cases 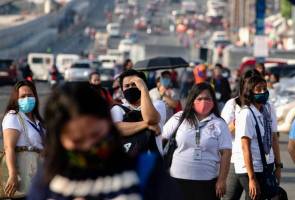 MANILA: The number of COVID-19 cases in the Philippines rose to 25,930 after the Department of Health (DOH) reported 539 more infections on Sunday, China’s Xinhua news agency reported.

The DOH said in its bulletin that the number of recoveries further climbed to 5,954 after 248 more patients have survived the disease.

The death toll also increased to 1,088 after 14 more patients have succumbed to the viral disease, the DOH added.

“One duplicate case was also removed from the total cases reported as of June 13,” the DOH added.

According to the DOH, 295 of the daily reported cases were in Metro Manila, 115 cases in the Central Visayas region in the central Philippines and 129 cases were reported in other parts of the country.

Philippine President, Rodrigo Duterte is expected to announce on Monday on whether or not to tighten or ease the lockdown restrictions in Metro Manila and other parts of the country.

Presidential spokesman Harry Roque said Duterte’s decision will be hinged “on how fast the number of cases rose or the doubling rate and our capacity to provide critical care.”

“All of that is part of the data being readied for the decision of the president,” Roque added. – BERNAMA