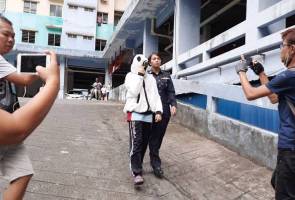 GEORGE TOWN: A teenage girl and her boyfriend who were arrested following the death of a newborn that was thrown out of an apartment in Bandar Baru Air Itam yesterday, have been remanded for six days beginning today.

Timur Laut District Police chief ACP Soffian Santong said the 18-year-old couple was being investigated under Section 302 of the Penal Code for murder.

“The teenage boy is currently being detained at the Bayan Baru Central Lockup while his girlfriend is still receiving treatment at the Penang Hospital (HPP). She is in good health but according to the doctor, she needs follow-up treatment and counselling.

“The teenage girl may be allowed to leave the hospital on Monday, but it depends on her condition,” he said when contacted here today.

He said police were conducting further investigations into the case before referring it to the deputy public prosecutor’s office for further action.

The body of the baby girl was found by residents of the apartment building at 8.18 am with severe head and body injuries.

The teenage girl is said to have thrown her newborn child from the 13th floor because she panicked after suddenly giving birth to the baby, as she had not informed her parents about the pregnancy.