“Call me Master, B*tch” 26yo Woman Exposes Boss For Allegedly Sexually Harassing Her

Recently, a 26-year-old woman, Ker Qian, took to her Facebook to speak up about the months of mental torture and sexual abuse she had to endure when she took up a new job at a new dance academy.

In the 12-minute and 54-second video, Ker Qian, who is a full-time dance instructor, revealed how her boss at a new academy verbally abused her and violated her privacy, which led to sexual harassment. 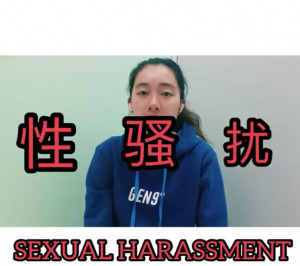 Speaking to WORLD OF BUZZ, Ker Qian said she would like to create awareness of the abuse she had to endure and wishes that all women and men would learn a thing or two from her experience.

Her boss was the father of one of her students

In the video, Ker Qian explained that the abuser was the father of one of her old students.

“Around April, I received a call from my ex-students father. He asked me how I was doing and whether I would be interested to join a project. I asked him what was this project about,” Ker Qian began to explain.

The man explained to her that he recently invested in a new dance academy and would like to invite her to be a dance instructor, as well as the owner of the studio.

“I asked him, how can I be a studio owner? He replied saying, “Okay, nevermind. We meet at someplace. You come and see the studio”. [In the] beginning of April, I went to see the place at Denai Alam,” Ker Qian said.

“I decided to become an instructor, but not the owner of the studio”

Upon meeting the man at the studio, Ker Qian said the place was still undergoing renovations as there were workers in the midst of painting the place.

Although Ker Qian did not promise the man at the time that she would take up the job he had offered her, he began to introduce Ker Qian to the workers as the “future owner of the studio”.

“I was in shock. I was thinking, “I haven’t promised you anything, why would you say that I am the owner?” So, I just stayed silent to see what else he had to say,” Ker Qian explained.

Later on, they sat down at a coffee shop, and he started to reveal his plan to Ker Qian. 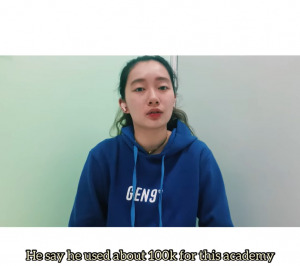 “He said he used RM100K for this academy and to manage this studio. He said he lacked one person who is passionate about dancing, who loves children and would like to earn some income.

He said I am the person who first came to his mind and that I am his perfect choice,” Ker Qian said.

Because this man was someone she did not know too well, Ker Qian decided to take some time to consider the job offer by discussing it with her friend.

After carefully considering her options, Ker Qian decided to take up the job as an instructor for six months but not as the owner of the academy.

In the month of May, Ker Qian began to work for this man from Monday till Friday, every week.

Firstly, he wanted only female teachers. Secondly, he wanted them to be between the age of 18-25 years old. Thirdly, he said it would be better if they came from broken families or in desperate need for money,” Ker Qian said in her video. 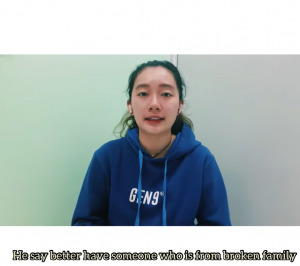 According to Ker Qian, when she questioned his requirements, he said this way, these teachers would be “more passionate in the job” and “more serious in the job” because they needed money.

This was the first very first red flag that Ker Qian noticed but continued to listen as he was the boss.

“Address me as Master”

Ker Qian said, moving forward, one day, he asked her to start keeping their conversations private and confidential, including Zoom meetings and WhatsApp conversations. 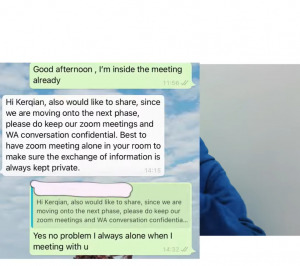 He then told her that he felt like she was being rude and disrespectful towards him because she had been addressing him by his name only.

“I said “okay, so what would you like me to address you then?”. He said, “I want you to call me Master.” 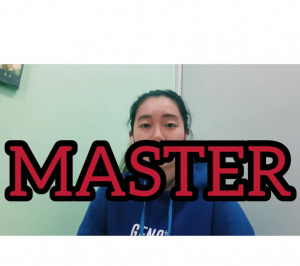 Then I thought, Master? As in those bad kinds of Master? And he said, “as someone who is under training with me, you should call me Master.”

He then proceeded to educate Ker Qian about the “12 times, 12 weeks” research he had learnt from overseas that he claimed would make Ker Qian a successful person in life.

Curious about this research, Ker Qian told him she had never heard of it before and would like to understand.

“He asked me, “What is your favourite pet?” Before I could answer, he said, “A dog, correct?” and I agreed. And then he said, “Now, you need to listen to whom to be successful? Me, right? Because I am your Master”. I just said okay,” Ker Qian said.

“So how do you make yourself successful? You need to listen to me, your master’s words. You need to follow my instructions,” he told Ker Qian.

He then proceeded to instruct Ker Qian to repeat the phrase “I am Ker Qian. I am a dog. I will 100% listen to my Master.”

“I started to laugh and he said, “Serious serious. Do not feel that it is funny or ridiculous because this research is real. You need to trust me if you want to be successful.

You have to say this phrase 12 times a day for 12 weeks.” He said, by 31 August, I’ll notice that my mindset have changed for the better.” 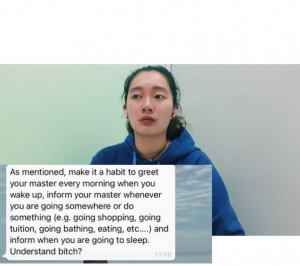 He even told Ker Qian to make it a habit to greet her ‘master’ every morning when she wakes up and to inform him of her schedule every day.

“Example, when you’re going shopping, going bathing, eating…etc. And inform me when you are going to sleep. Understand, b*tch?” he told Ker Qian in a WhatsApp message.

When Ker Qian tried to explain that she feels uncomfortable doing so as it is invading her privacy, he told her: 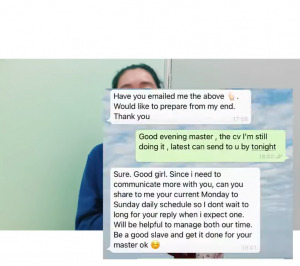 So, Ker Qian decided to give in to calling him Master but told him she still felt uncomfortable with this “extreme training”. He said he would explain more about it in their next meeting. 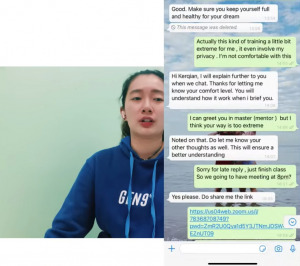 “You are childish because you have your own mindset”

“When we started the meeting, I told him I am feeling extremely uncomfortable. He started to scold me and said that my mindset is very childish,” Ker Qian said.

“As a successful person, you wouldn’t have this kind of mindset. You told me you did those training, 12 times a day for 12 weeks, and now from what I see, your training is not good enough. Because you still have your own mindset.

If you want to be successful, you need to be 100% empty, 100% obedient to me, so that you can achieve success faster,” he told Ker Qian. 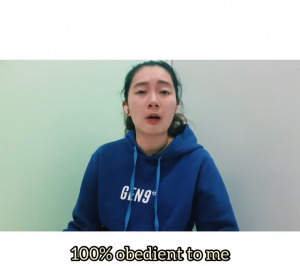 “You see la, your ex-boyfriends can buy you flowers, bring you to movies, you would be happy. And then, you give them your body. And you make out with them, have sex with them… then why can’t you give me your body when I can give you a bright future?” he said to Ker Qian. 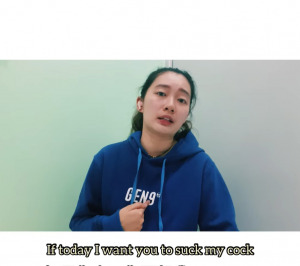 “You see, I am a capable person and also very rich.

If today I want you to suck my cock, you will also suck until very comfortable, happier and more proud, right?

You want to help those useless men and poor men to suck cock. Today you help me to suck cock, you will also feel very happy and proud what? Why? Because I have money,” he allegedly told Ker Qian.

“I decided to make a police report”

After the lecture she had to endure, Ker Qian quietly agreed with him to not cause any further problems. Later on, she confided in her friend and decided to make a police report against the man.

“My friend Lynn told me this is sexual harassment and that he was constantly insulting me. She told me I should make a police report but I needed to get evidence first,” Ker Qian explained in her video. 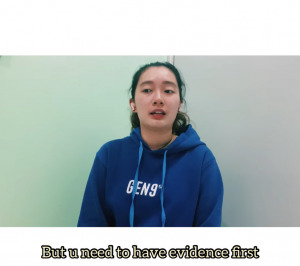 On 7 June, Ker Qian had a meeting scheduled with her boss. This time, she secretly recorded their conversation and used it as proof when making a report against him. When recording the call, Ker Qian said she intentionally acted dumb so that she can catch him admitting to everything.

Ker Qian’s case has currently been taken over by Majlis Tindakan Pengguna Negara (MTPN) and she hopes to see justice prevail.

What are your thoughts on this story? Let us know in the comment section below!

Also Read: “Why don’t you come naked?” 23yo Shares How Male Teacher Used To Sexually Harass Her