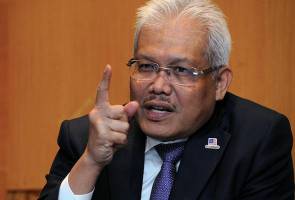 IPOH: Leaders and members of the Parti Pribumi Bersatu Malaysia (Bersatu) cannot mock and modify the party’s logo as action can be taken against them, said Bersatu secretary-general Datuk Seri Hamzah Zainuddin.

He added the logo of any party was established as a symbol which should be appreciated and defended by every member, and not to be mocked.

“Those who mocked the party logo showed that they do not love the symbol of their own party. I advise that they don’t do it as action can be taken against them in accordance with the party constitution and Societies Act 1966,” he said.

Hamzah, who is also the Home Minister said in a press conference after delivering a posthumous promotion to the late Corporal Safwan Mohamad Ismail to the rank of Sergeant as well as Ex-Gratia scheme and derivative benefit at the General Operations Force Camp Ulu Kinta here today.

In a separate development, Hamzah denied speculations that his presence in Sabah was to meet Parti Warisan Sabah (Warisan) members of Parliament, on political grounds as alleged by the DAP Political Education director Liew Chin Tong.

Instead, according to Hamzah, the meeting was in his capacity as the Home Minister to assist anyone in need.

He also welcome anyone to meet him and the ministry’s door is always open to help the public.