BCL expresses her feeling of loss through 12 Tahun Terindah 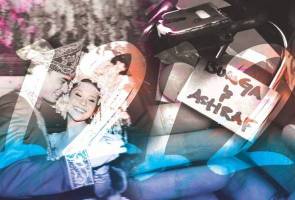 KUALA LUMPUR: “Thank You, God. You have given me 12 beautiful years with him, living the love I thought never existed, I won’t replace it with anything in the world”.

This is the lyrics of a verse from Indonesian singer Bunga Citra Lestari’s new single, titled “12 Tahun Terindah” (12 Beautiful Years), released on Sunday.

At the time of writing, the music video of the song which was released on Bunga Citra Lestari’s Youtube channel “It’s Me BCL” has garnered nearly one million views four hours after it was uploaded at 12pm.

The official music video of the song shows a series of throwback photographs and video recordings of sweet memories between Bunga Citra Lestari, or better known as BCL and her late husband Ashraf Daniel Mohamed Sinclair or Ashraf Sinclair as well as their 10-year-old son Noah Aidan Sinclair.

Among them are photographs of BCL and Ashraf’s wedding, their family vacation, the birth of their son as well as a snippet of a television programme where BCL first met her late husband.

The four minutes and 41 seconds music video, directed and edited by Ashraf’s youngest brother, Adam Sinclair, which ends with a scene where BCL and her son, as well as their cats sitting with their backs to the camera, has touched the hearts of many including fellow artistes.

Malaysian singer Yuna who is also BCL’s sister-in-law, shared a posting about the song on her Instagram story yesterday with the caption “My sis is releasing her beautiful song tomorrow ’12 Tahun Terindah’. Rest in peace Ash, we miss you, Al-Fatihah”.

Fans, fellow artistes as well as netizens also flooded the comments section of BCL’s official Instagram account to express their support over her new release.

Ashraf who was Indonesia-based Malaysian actor died of a heart attack on Feb 18 at the age of 40.