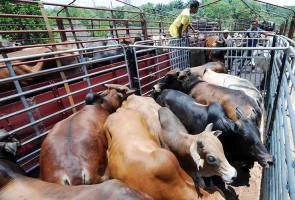 He said the ritual can be performed at all mosques, surau and locations permitted by Federal Territories religious authorities and must abide by the guidelines issued by the Department of Islamic Development Malaysia (JAKIM).

Ismail Sabri said a maximum of only 30 people would be allowed to attend the ritual at any one time.

“Organisers must also inform the nearest district health offices prior to holding the ritual,” he said at a daily press conference on the Recovery Movement Control Order here today.

Ismail Sabri said the process of cutting, packaging and distributing the meat must be held at an open space and must avoid 3C namely crowded area, confined space and close conversations.

He said among the SOP which must be adhered to are conducting body temperature check or providing hand sanitisers.

“Attendance must be recorded and those who are unwell not due to chronic diseases are not allowed to participate in the ritual.

“Children under the age of 12 are not allowed at the premises. Participants are required to register with the MySejahtera application, wear face masks and adhere to the one-metre social distancing rules,” he said.

Ismail Sabri said it is advisable to perform the ritual using the modern slaughtering method.

In another development, he said foreign domestic helpers, especially those from high-risk countries and are currently in their home countries are not allowed to return yet.

Meanwhile, Ismail Sabri said foreign crew members or sailors are allowed to work onboard the ships but prohibited from disembarking when the ships are docked at the ports.

On the compliance rate of those undergoing home quarantine after returning from abroad, he said so far, no reports have been made over violation of the order.

He said from June 10 until yesterday, 5,093 individuals returned from abroad and of that total, 5,067 were ordered to undergo mandatory quarantine at their respective homes and 26 were taken to hospitals.