Previous Next
36th ASEAN Summit made history amid COVID-19 pandemic 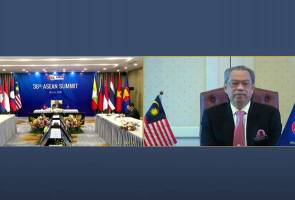 PUTRAJAYA: The 36th ASEAN Summit, which was held virtually for the first time, witnessed leaders of the member states reaffirming their commitment for the need to further bolster cooperation in the face of the COVID-19 pandemic.

Although restricted by movement and space, where leaders of the grouping had not been able to meet physically in Vietnam this time – including to perform the ASEAN tradition of crossover handshake – the meetings and interactions had proceeded virtually and in high spirit.

Vietnam is the Chair for this year’s Summits.

The one-day 36th ASEAN Summit, which carried the theme “Cohesive and Responsive ASEAN”, saw leaders discussing a wide range of issues and cooperation concerning the region, with focus on the need for a comprehensive post-pandemic recovery plan for ASEAN.

Prime Minister Tan Sri Muhyiddin Yassin, who led Malaysia’s delegation to the virtual Summit from Putrajaya, had put forward a proposal for ASEAN to formulate a Regional Economic Recovery Plan for that purpose – underscoring the need for ASEAN to act swiftly and decisively in coordinating a regional level response to revitalising the economies.

“A well-coordinated response will ensure we emerge (from) this crisis stronger together, much like how we have weathered previous crises,” he said during the Plenary Session of the 36th ASEAN Summit.

This was also the first time Muhyiddin attended the ASEAN Summit as Prime Minister after he was appointed last Feb 29.

In his intervention, he had also called on his counterparts to strengthen their resolve in fulfilling their collective responsibilities, adding that it is “now, more than ever” for the 53-year-old regional grouping to show to the world the “ASEAN Way” of doing things.

“It is now, more than ever, we need to show the world which is full of hate and divide, full of tears and suffering, that the ASEAN Way – which is far more than just leaders holding hands in photos – does work.

“Considering recent developments, we must show to the world that as a regional bloc, we can rise to the occasion and take leadership. All our trials and tribulations can eventually be surmounted so long as mutual trust, respect and transparency remain,” he said.

He also highlighted the issues of the Rakhine State, the Palestinians and the South China Sea.

According to Foreign Minister Datuk Seri Hishammuddin Tun Hussein, who was also part of the delegation, Muhyiddin’s emphasis on reviving the regional economy was received positively and translated into discussions between the leaders on more concrete decisions such as a regional ‘travel bubble’ and intra-ASEAN tourism.

Muhyiddin had also participated in the ASEAN Leaders’ Interface with Representatives of ASEAN Inter-Parliamentary Assembly (AIPA), held on the sidelines of the Summit, where he had emphasised on the important role of parliamentarians in supporting ASEAN’s efforts to combat COVID-19, and in promoting awareness on the ASEAN Community at the grassroots level.

As pointed out by Vietnam’s Prime Minister Nguyen Xuan Phuc in his opening remarks at the 36th ASEAN Summit, while facing the present challenges, ASEAN must also be prepared to deal with the challenges ahead.

He said for the latter half of 2020, the challenge would be for governments of the ASEAN member states to lead ASEAN out of this period of adversity, adding that if succeeded, it will stand as a testament to the lasting values and vitality of ASEAN Resilient and Dynamic Community,

“I expect that the 36th ASEAN Summit will be an occasion for ASEAN member states to reassert our spirit of solidarity, our strong political will and commitment to rise above the adversities of the pandemic and keep forging ahead.

“On the one hand, we need to maintain good control over the COVID-19 pandemic. On the other, we should promptly repair its damage, and revitalise our economy and resume our economic development. This should be coupled with efforts to realise the set targets for ASEAN cooperation and integration of this year,” Nguyen said.

The Summit this time also saw the ASEAN Leaders’ Special Session on Women’s Empowerment in the Digital Age – which was to affirm the leaders commitment to promote gender equality and women’s empowerment and to enhance the role of women in building the ASEAN Community – being held for the first time.

The 36th summit was initially scheduled to be held on April 6 to 9 in Da Nang, Vietnam, but was rescheduled due to COVID-19.