3 outstanding performances from Malaysias finest at ONE: Masters Of Destiny

Previous Next
3 outstanding performances from Malaysias finest at ONE: Masters Of Destiny 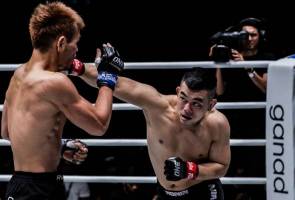 It was another exciting night of martial arts action in the Malaysian capital of Kuala Lumpur as ONE: MASTERS OF DESTINY delivered 15 mouth-watering clashes on Friday, 12 July.

Thousands of fans packed the sold-out Axiata Arena in Kuala Lumpur to watch the back-and-forth battles, submissions, and amazing knockouts.

In case you missed it, here are three of the best performances from Malaysia’s very own world-class athletes.

#1 Ting treats to his hometown fans to an exciting finish

Ev “E.T.” Ting pulled off the most impressive comeback victory of his career, snapping his two-match losing streak when he defeated Daichi Abe.

It wasn’t an easy win for the Auckland MMA athlete as he had to fend off Abe’s heavy striking early on. The second stanza proved to be a different tale as “E.T.” showed his foe his strength on the ground alongside his striking dexterity.

Unable to cope with Ting on the mat, Abe tried to bring the contest on the feet – but that ultimately marked the beginning of the end. Ting brilliantly scrambled onto his opponent’s back and locked in a tight rear-naked choke, which forced his adversary to tap at 4:44 of the second round.

Jihin “Shadow Cat” Radzuan unchained a remarkable win against Jomary “The Zamboanginian Fighter” Torres in front of her compatriots in Kuala Lumpur.

The 20-year-old atomweight sensation pushed Torres in reverse gear as soon as the bell rang, and Jihin threw a superman punch which caught Torres off guard just a minute into the match.

It was a one-sided affair from then on as the “Shadow Cat” displayed her brilliant grappling and wrestling skills.

Torres tried to slam her way out of trouble, but that exchange only allowed Jihin to transition from an armbar to a triangle choke in some fashion. It looked all but over moments later as the Filipina warrior could not find an escape route.

The victory at the 3:07 mark of the first round is Jihin’s fastest win at The Home of Martial Arts.

The only all-Malaysian clash on the card proved to be one of the most explosive exchanges of the night.

Mohammed “Jordan Boy” Bin Mahmoud and Saiful “The Vampire” Merican held nothing back in their thrilling ONE Super Series Muay Thai bantamweight contest.

“Jordan Boy” unleashed everything in his attacking arsenal, but “The Vampire” replied with venomous strikes of his own.

Both athletes could not secure the finish that they craved for, but it was clear that the 23-year-old from Sampuri Muay Thai Gym Ampang deserved the win.