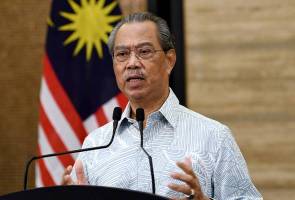 KUALA LUMPUR: The timely response in closing borders to other countries, as well as in implementing the Movement Control Order (MCO) were among the main factors that has helped Malaysia curb the spread of COVID-19.

These were among the most crucial and commendable decisions taken by Prime Minister Tan Sri Muhyiddin Yassin after he was sworn in as the eigth prime minister, succeeding Tun Mahathir Mohamad.

The Institute for Democracy and Economic Affairs (IDEAS) Malaysia research manager Lau Zheng Zhou said Muhyiddin’s overall handling of the pandemic crisis has a direct impact on the state of the economy.

“Compared with other countries, the timeliness of the government’s decision to impose the MCO, along with high certainty and clarity in public communications, had helped us flatten the COVID-19 curve early enough and, in turn, avoided more deaths.

“This has certainly put us in a stronger position to attain recovery,” he told Bernama when asked to comment on Muhyiddin’s first 100 days in office as the prime minister.

Lau said this crisis presents an opportunity for the government to pursue structural reforms to the economy, particularly in areas such as dependency on foreign workers, broad presence of government-linked companies in the private sector, and also relatively low female labour participation.

However, if structural reforms were deemed costly enough to implement before the MCO, one can only imagine how much tougher it is to pursue them now despite the high availability of capital and other resources, he said.

The next phase of the economic recovery would be a bigger test to Muhyiddin’s premiership, he reckoned.

“Investment and trade had been weak even before the MCO and the dampened global demand today further limits the government’s policy option.

“The government will also face the trade-off between opting short-term policy measures to reduce unemployment, which could have significant political consequences, and a long-term investment in digital and green infrastructure as means to build economic resilience,” he elaborated.

Lau hoped the Prime Minister would treat this pandemic crisis as a window of opportunity to hard-wire climate change and sustainability measures into economic policy making, or to flatten the climate curve as advocated by multilateral organisations such as the United Nations.

The COVID-19 virus goes beyond national borders and has proven to have put the poor and vulnerable groups at greater risk, and this would probably be true for greenhouse gases.

“Disruptions to food security, trade and supply chain will also happen should there be a climate-related crisis that should invite a joint effort by countries in addressing them.

“Hopefully, Muhyiddin will develop a policy surrounding economic crisis management, preferably by commissioning a white paper, and institutionalise mechanisms so that our economy can be more resilient moving forward,” he added.